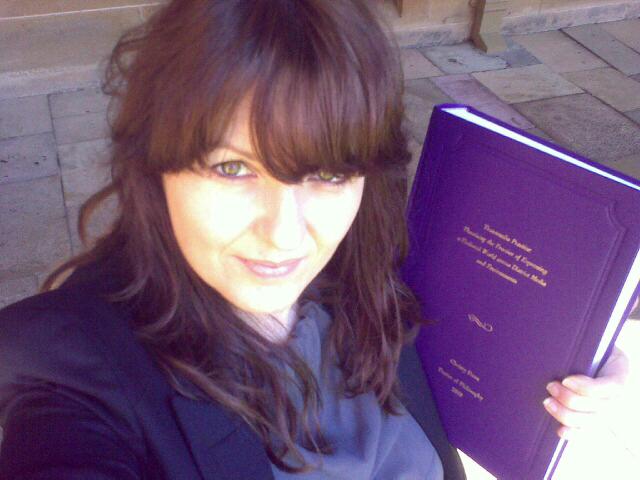 My PhD on ‘Transmedia Practice: Theorising the Practice of Expressing a Fictional World across Distinct Media and Environments’ at Sydney University, 2009. I take a transdisciplinary approach, focusing on the changes to the way we create with transmedia, including phenomena from different types and countries and across time.

“I am particularly impressed with the wealth of material tackled in the dissertation, and also the numerous theoretical sources applied. Despite its almost encyclopaedic nature, the dissertation is clearly and engagingly written, and the richness of material does not congest the flow of argument. Dena furthermore manages to engage theorists and prior commentators in a generous yet critical manner, identifying their weaknesses while pointing out and employing their useful aspects. Her level of scholarship is impressive and style convincing.”

“But its significance extends far beyond the novelty of the phenomenon under investigation. This is a truly groundbreaking work whose strengths are too numerous to list: the breadth of its scope, the extent of its scholarship, its development of new analytical tools, its extension of the vocabulary of new media studies through interdisciplinary ideas, and above all its lucid examination of the design problems encountered by multi-media projects.”

“I would like to reiterate my strong appreciation of this excellent thesis that explores a vast field of fascinating practices, that demonstrates an impressive knowledge of numerous theoretical works on the various aspects of the question, and proposes an ambitious model that encompasses domains that are too often treated separately “ traditional media and Internet, narratives and games, entertainment fiction and experimental works of art. That Christy Dena has done this without lapsing into syncretism is much to her credit, and I would like to congratulate her warmly.”

In the past few years there have been a number of theories emerge in media, film, television, narrative and game studies that detail the rise of what has been variously described as transmedia, cross-media and distributed phenomena. Fundamentally, the phenomenon involves the employment of multiple media platforms for expressing a fictional world. To date, theorists have focused on this phenomenon in mass entertainment, independent arts or gaming; and so, consequently the global, transartistic and transhistorical nature of the phenomenon has remained somewhat unrecognised. Theorists have also predominantly defined it according to end-point characteristics such as the ‘expansion’ trait (a story continues across media). This has resulted in the phenomenon being obscured amongst similar phenomena. Therefore, rather than investigate the phenomenon as it occurs in isolated artistic sectors and with an end-point characteristic, this thesis investigates all of these emergences through the lens of transmedia practice. That is, this thesis investigates the nature of transmedia practice in general, according to the way practitioners conceive and design a fictional world to be expressed across distinct media and environments.

To do this, this thesis draws on the semiotic theory of ‘multimodality’ and ‘domains of practice’ (Kress and van Leeuwen, 2001) to illuminate the unique knowledge and skills of practitioners involved in the design of transmedia projects. The industrial and aesthetic implications of the employment of distinct media are discussed, along with their semiotic activation. Related theories such as ‘hypertextuality’ and ‘transfictionality’ are problematised in light of transmedia phenomena. Since the phenomenon involves both narrative and game modes, a new methodology is introduced to study their presence at various stages of design: transmodality. The employment of the actual world in transmedia practices is discussed in light of Aristotle’s ‘dramatic unities’ and through ‘deictic shift theory’. Through research questions from media, narrative and game studies as well as semiotics, this thesis aims to explain how transmedia is a peculiar practice that demands its own research area and methodologies.