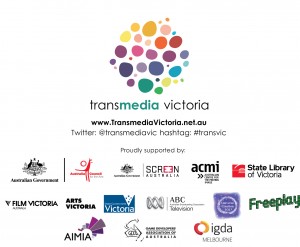 Transmedia Victoria was a special one-time only event held on 27th and 28th of January 2011 focused entirely on transmedia. Transmedia professionals from around the world and Australia came together with directors, artistic directors, writers, designers, producers, and project managers in film, TV, theatre, gaming, music, literature and digital sectors. I curated the audience as well as the speakers by setting up an application process and (more importantly) personally inviting creatives from many artistic disciplines. I guided the speakers to pitch their talks at intermediate-level, with no financial justifications for working in transmedia. Due to the different interests of the funding bodies, I included talks about writing, design, producing, business; local and international; TV, film, theatre, and gaming; males and females.

I was commissioned to curate and run the event by the Australia Council of the Arts (along with Eve Penford-Dennis who was the project manager from Freeplay). Part of my brief was to get as many funding bodies on board as possible. Fortunately, after months of discussions, all of the funding bodies came together to invest — the first time they had joined forces for such an event. Partners include Screen Australia, Arts Victoria, Film Victoria, Multimedia Victoria, and the ABC. Venue partners include ACMI and the State Library of Victoria, and supporters include AIMIA and Game Developers Association of Australia.