At the beginning of my research a few years ago, I analysed the Nightmare video-board game. The new Atmosfear DVD board is still part of my research and so I was thrilled to see an article in the latest GameNews enewsletter on ‘Mixed Media Board Games’.

In the broader scheme of things, the video game industry co-exists with the board game industry, however the connection between the two is little explored.  At the same time that video games have been establishing their credentials as a popular form of entertainment, the board game industry has also prospered, partly as a result of a European rennaissance spurring game design and partly due to innovative board games that incorporate moving images and digital media.

Board games have at least three key aspects: family or group involvement, replayability, and very easy set-up. Video games on the other hand have come from a tradition of requiring the necessary hardware to play, providing enjoyment for the single player, and depending on the genre or type of game of course, little focus on replay value.

The European renaissance in board games refers to a situation credited to a game of the year award introduced in Germany in 1978, which resulted in the creation of a run of modern board games that are popular in Europe and have been translated into English, to find much broader appeal. However the incorporation of moving images and digital media into the world of board games has a close connection with Australian industry as a result of the success of the trailblazing game, Nightmare, and its follow on products, and additionally today through the efforts of DVD Trivia Games and its series of sports and popular topics DVD board games.

Going back to the late 80’s and early 90’s, Phillip Tanner explains that he and Brett Clements had a production company called A Couple ‘A Cowboys and Brett “had a lot of success with a board game called Oz Quiz initially and then together we created Dare, The Truth Hurts, and Idiot Box – all traditional board games.” “Brett suggested we combine our production skills with our board game skills and that is how we created the video board game genre.”

The original video board game Nightmare debuted in Australia in 1991 and throughout Europe in 1992. Three sequel tapes were created, Nightmare II Baron Samedi The Zombie, Nightmare III Anne De Chantraine – The Witch, and Nightmare IV Countess Elizabeth Bathory – The Vampire. And in 1995 Atmosfear The Harbingers was launched.

“Nightmare is a race against time and is all about frightening fun.  You have a host that guides the game, makes you jump, makes you laugh and sets you up against your friends” explains Phillip, adding “it is a lot of fun to play and is at its very basic the simplest form of interactive television – you talk to the TV and the TV talks back to you.” 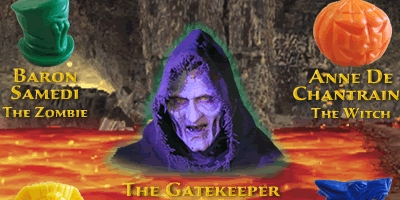 The VHS video allowed for very easy setup of board games that incorporated moving images, and the DVD player does so today.

Phillip reports that Nightmare sold 3 million units worldwide as a video board game, and the DVD version, renamed Atmosfear, has sold an additional 750,000 units in the two years since launch in 2004. Phillip partly attributes the remarkable success to marketing stating that “Nightmare was marketed wonderfully through Village Roadshow and included TV, Cinema, and even video tapes. It was branded not just as a game but as an entertainment package. The guy in charge of selling the game in [to wholesale], Milt Barlow, was very passionate about it and every distributor world wide felt the same.”

The DVD Trivia Games products AFL DVD Trivia Challenge, World War 2 DVD Trivia Challenge, and Cricket Trivia Challenge were launched towards the end of 2006 and in regard to commercial success so far, Tom says he “wouldn’t put it down to giant.” “We have made our money back but are not in profit, the money has been reinvested in the product and further development” explains Tom. This has led to a move to cross promote the board game through mobile phone spin-off games and PC downloads. The mobile phone spin-off games include recently released AFL Grandfinal and NRL Final games available through the Telstra network, which includes a revenue share back to DVD Trivia as well. The additional products and promotions aim to introduce people to the DVD board games.

Phillip comments that games are all about a journey, skill, and chance. “With board games you spend a lot of time working out the basics because normally you just have a board, playing pieces and dice – it is what you do with them that makes it interesting. With video games you add functionality, graphics and audio but if the underlying game is crap it doesn’t matter how cool it looks.” “Make the game fun and interesting, know your target market and hopefully make some money” remarks Phillip.

For those in Melbourne, Australia, Tom Parkinson will speak at the next Dissecta on 25th September.

3 thoughts on “DVD Board Games”