A 12 minute animated documentary VR project for SBS (Gear VR, Go), I was brought in as a Narrative Design consultant by VRTOV. I worked with Douglas Watkin, Oscar Raby, Katy Morrison, and Brooke Mags.

An animated documentary in interactive VR, A Thin Black Line is directed by Douglas Watkin with artwork by Vernon Ah Kee and is produced by the VR production studio VRTOV.

A Thin Black Line invites you to step into a pivotal event in the history of one family, and a nation, as seen by a young child. The bombing of Darwin in 1942 was the first and largest aerial attack on mainland Australia during the Second World War. When the bombs reach Patima’s hometown, she is forced to flee, leaving her father behind.

A Thin Black Line has been commissioned by SBS with support from Screen Queensland as part of their Untold Australia series which offers uniquely personal stories from some of Australia’s diverse communities. 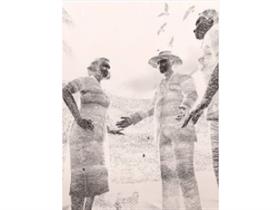